Ghost nets are fishing nets which are either abandoned, lost or otherwise discarded in the ocean. These nets which spread across the ocean bed can continue to trap fish and other marine species killing them. This phenomenon is called “Ghost Fishing“.

Fishermen who venture into the sea to catch fish have no knowledge of the topography of the sea. Whenever they see a shoal of fish they release their gear around the shoal trapping the fish inside. Fishing nets sometimes get entangled in rocky structures on the seafloor and it becomes hard for the fishermen to retrieve it leaving the fishermen no  choice except to abandon the net. This will be a huge loss to fishermen as the net itself is a huge investment for them.
With loss of net and fish catch fishermen often go back empty handed. This creates a serious financial impact of poor fishermen forcing them into more debts .

According to a report by WWF around 500,000 and 1 million tons of fishing gear are entering the ocean every year. These ghost nets are killing millions of fish and marine wildlife worldwide. Ghost Nets are one of the primary contributors of Marine Pollution. Lack of gear management strategies is leading to immense amount  of most dangerous marine debris . Endangered species like Sea Turtles, Dolphins , Sharks and Rays often get entangled in these nets and die of exhaustion. Retrieval of ghost nets is very hard as it’s not an easy task to trace them in the vast ocean. Animal Warriors Conservation Society initiated a program called Ocean Warriors to address these issues at grass root level to find solutions to mitigate the problem by empowering fisher community by introducing technology to reduce the marine pollution by fishers. 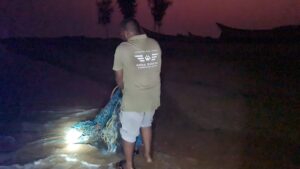