An Initiation by Animal Warriors Conservation Society to feed stray dogs thinking of a future crisis that can be avoided by taking a few necessary actions in this lockdown period which implies to all stray dog populated areas.
In developing countries like India, society would be dealing with a different kind of problem with “Man’s Best Friends” where stray dogs are largely dependent on humans for survival and the lockdown period can close the bridge between two ends and can monopolize dogs for survival battle.

Here we need to consider an important aspect of a stray dog’s natural behavior.

Dogs are ancestrally connected to carnivore species like wild dogs, wolves, and jackals. According to studies – around 12,500 years ago the most fruitful association began, humans started domesticating the dogs for different purposes like companions, working partners and protection. 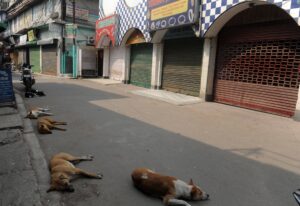 In India apart from the pets, we also have the free-ranging neighborhood dogs living in urban areas and villages, landscapes that support wildlife habitat which subsist on food from humans as a source of feeding occasionally and scraps of food from the garbage bins or dump yards available and a little population dependent on wildlife.

In urban areas our stray dogs receive a lot of attention and publicity, it is in the vast rural areas that they might cause more severe problems. This is because much wildlife exists in rural areas throughout the world. And, in India and other countries wildlife reserves are surrounded by human habitation. In such areas, free-ranging dogs have numerous opportunities to interact with wildlife at multiple levels – as predators, prey, competitors, and disease reservoirs or vectors.

*When there is a shortage of human subsidized food for such a large number of stray dogs during this lockdown period which is being observed, few dogs can search for an alternative food source which can also be wildlife which is available around them.
Would like to give an example for this. 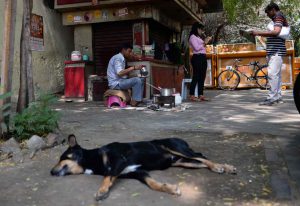 When free-ranging dogs get enough food from their human sources, they hang around settlements. When their food supply is cut off, they turn to wildlife or livestock. Which is what happened in the Upper Spiti area in Himachal Pradesh. A recent explosion of tourism in the area meant more food for the dogs during the tourist season. In the lean tourist season, however, the dogs couldn’t get enough food and seemed to turn to livestock and wildlife.

Free-roaming stray dogs stealing/ killing livestock is also a threat and this lockdown will trigger such situations more.
We should be considering a problem which can be created during this lockdown period, As lockdown has made us to confined to our homes and limited our movements to very little areas many young and upcoming generations of free-roaming stray dogs puppies will be in serious confusion and will not be familiarised with the human presence around them, this leads to a serious problem in future creating a panic situation in the society with the un familiarized free-roaming stray dogs. These new set of stray dogs are completely new to humans and are hard to be tamed and will/may remain to look for livestock/wildlife as their source of food.

When these free-roaming stray dogs get into the close contact spaces of wildlife in urban and in the rural areas there is another possibility which we need to focus on.

*Unfortunately, dogs harbour several diseases that can impose threat not only to humans (such as rabies) but also to wild carnivore species. Also, recent studies show there is a possibility that dogs can transmit diseases such as canine distemper virus (CDV) and canine parvovirus (CPV) to other species.

What can be done to avoid these unwilling situations which are created during the lockdown period?

*Identify the isolated free rooming stray dog populations around our locality and near to the wildlife habitats and subsidize them with the food whenever we can so that they need not be searching for the alternatives for food sources.

*By often feeding them, we can establish bonding and relieve their fear for humans, which can initiate Spay/ Neuter programmes by the governments/ forest departments (near to wildlife habitats) to control the population explosion of the free rooming stray dogs.

*This regular feeding process leads to establish a good and friendly binding with the new generation of dogs and helps the organisations and authorities to vaccinate such friendly ones.

Animal Warriors Conservation Society is trying to apply these solutions for generating a healthy ecosystem between free rooming stray dogs and make them less dependent on wild animals.

The Team has selected Hyderabad Central University campus and started feeding and habituating them to alternate food sources other than livestock/wildlife. This has also made the monitoring of the dogs easy and encouraging the friendly interaction between dogs and humans. This would help in balancing the population of the dogs and also helps in avoiding the disease outbreaks in the animals. Eventually, helping the Ecosystem to heal.
Animal Warriors Conservation Society believes that Dogs should be considered victims for this lockdown situation and delivering different feeding methods can help resolve this crisis situation in the country to stop a conflict situation which the country has to face in the coming future.