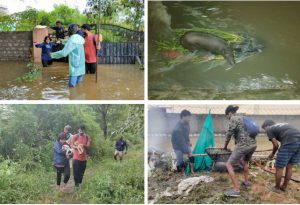 With a deep depression over the Bay of Bengal brought incessant rains in Hyderabad which filled waters bodies around the cities. Heavily plastic polluted lakes flushed the plastics into drain lines which clogged them making the whole city submerged. Musi river dangerously swollen pushing communities around it underwater. With a surprise flood animals were trapped in floodwaters and unable to escape. We ran a campaign with preparedness measures to save animals in flood situations before the flood happened.